Synopsis of the documentary

Tajuddin Ahmad, the first Prime Minister of Bangladesh was born on 23rd July, 1925 at Dordaria village in Kapasia, near Dhaka.

The greatest achievement in Tajuddin’s life was to lead the liberation war of 1971 in absence of party president Bangabandhu Sheikh Mujibur Rahman. Although Awami League received absolute majority in the 1970 election, instead of handing over power to the Bengalees, the Pakistan Military junta arrested Sheikh Mujib and began a genocide against the Bengalees. Due to the inhuman torture and atrocities of the Pakistan Army about ten million people of Bangladesh took shelter in the neighbouring India as refugees. Tajuddin, along with other leaders of Awami League, came to India and met the then premiere of India, Mrs. Indira Gandhi. On 10th April the government of People’s Republic of Bangladesh was formed and on 17th April the government took oath in Mujibnagar. Tajuddin Ahmad was appointed as the Prime Minister.

Bengalee guerilla forces were formed and for nine months the battle for the liberation of Bangladesh continued. On 6th December India formally recognized Bangladesh and Indian Army took part in the war. The Pakistan army was defeated and on 16th December surrendered to the Indo-Bangla joint command. Bangladesh emerged as an independent state.

After independence Tajuddin Ahmad became the Minister for Finance and Planning in the cabinet of Bangabandhu Sheikh Mujib. He was proactive in the economic development of this newly independent country devastated by the war. Tajuddin’s impeccable honesty, competence and commitment in upholding democratic values made him a rare breed of politician of Bangladesh. It was unfortunate for Bangladesh that Sheikh Mujib’s relationship with Tajuddin, who was his most competent lieutenant, became sour. On 26th October, 1974 Tajuddin Ahmad resigned from Bangabandhu’s cabinet.

On 15th August 1975, Bangabandhu Sheikh Mujib was assassinated along with his whole family by a wayward section of the Bangladesh army. At the same day Tajuddin Ahmad was imprisoned. On 3rd November 1975, along with three other national leaders, Tajuddin was brutally assassinated inside the Dhaka Central Jail. 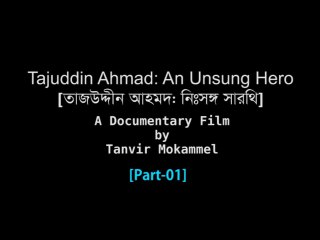